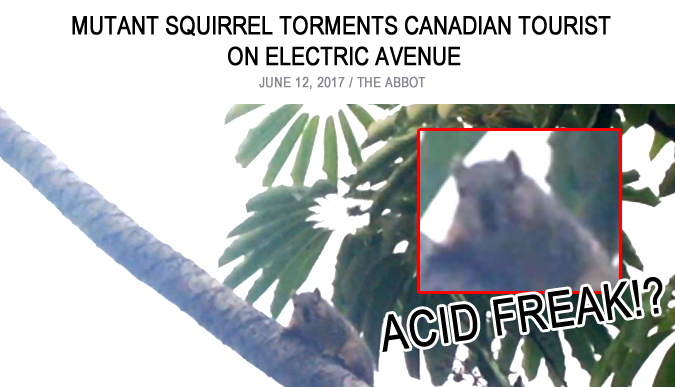 ELECTRIC AVENUE, PALMS – Racing down the street dressed only in a pineapple print romper with unlaced green Doc Martins Canadian tourist, Ewon Manitoba, found himself at the ass-end of a “squirrly” situation.  Witnesses report the Abbot Kinney weekend warrior was seen trouncing past cars screaming in a high pitched falsetto, “Help! I can’t deke this vagrant! Damn Eichhörnchen ate my gitch!  I need to get back to Cowtown!” 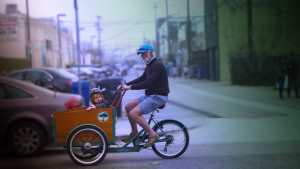 Multiple reports indicate a rather well-fed squirrel named Miles has been enforcing the “Locals Only” hidden code of Venice by chasing out the floral touri with scurrilous glee.  The squirrel-orist leaps out of any number of the palm trees behind The Brig and attempts to gnaw at the targets undergarments until either fed…or paid.  Miles, the local squirrel-about-town accepts Apple Pay, Square and Bitcoin to lay low via a network of raccoon and vermin protectors.

“A total wedge-meister, if you ask me,” commented Venice local Fred Rosenkratz, founder of dating startup, “Manson Match”, which matches local serial killers with their narcopathic counterparts via a scrolling system of digital validation in the form of ‘wants’, intended to hack the human brain by breaking the blood-brain barrier chemically by inducing the user into a sycophantic delusory sense of self based on false validation by a parasocial network of other entranced flesh-bodies, “….which eventually spawns them into little serial killers when I send the signal.”

The Abbot Skinny sent a crack team of forensic squirrel biologists to the scene and discovered that Miles had created a fort above the bungalows between Palms and Milwood protected by a family of raccoons and three large rats.   Graffiti tagged, “Third Eye Collective” is scratched onto the entrance to their bark fortress.  Both non-descript and brutal, sinister yet sweet, prophetic but aunry, Miles’ Lair of Curiosities has aroused zero suspicion among the human neighbors.  When Lily Court bungalow resident Bill White was asked for comment on the mammal citadel behind his home he replied, “All hail Miles.  All hail Miles. ,” and returned to a couch ensconcement surrounded by hamster cages.

In order to access Miles, the Abbot Skinny team deployed a feral boat-drone commanded by General Klurtz, veteran of Operation: Deeznuts, a top secret recently declassified ground war fought against an army of rabid squirrels on the Isle of Sacramento. Known for his proficiency with squirrel attackers, General Klurtz, gained access to the lair via the drone but lost contact with our offices and has since only been in communication via short haiku emails.

FROM : General Johar Von Klurtz
TO: THEABBOTSKINNY@GMAIL.COM
SUBJECT: “Ode to a lost Berkenstock”

This story is still developing in real-time and rest assured The Abbot Skinny will get to the bottom of this.  Meanwhile, check out this scene from Riverbottom Nightmare Band.